James Henry Brown was the first of the Brown family stonemasons to make his way to Utah. Upon his arrival to the state, he worked on many building projects, carved stones for memorials, and was commissioned to create a bust of Brigham Young. His grandson, Thad Brown, our grandfather, founded Brown Monument Co. around 1928.

Thad employed his father and eventually his two sons, Dee and Jim (James Henry Brown III). Thad eventually retired, followed by Dee. Currently, Jim and his children and their spouses carry on the family’s 90-plus year tradition of creating quality monuments.

The following article about James Henry Brown was published in the Deseret Morning News on Oct. 15th, 2004: 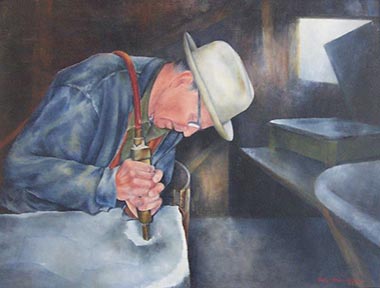 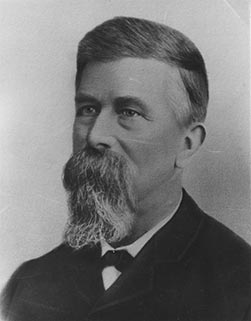 James Henry Brown was a descendant of William the Conqueror, who, among other things, built the Tower of London. So maybe it’s not surprising that stonemason genes seemed to run in the family.

“They were all stonemasons back to the 14th-15th century,” said Mark Redford Brown, a grandson of James Henry, who now lives in Salt Lake City (and will soon turn 90).

The trade served James Henry Brown well, both in England and later in America. It provided a way for him to earn a fairly well-to-do living. But it could also be noted that his work has served well the citizens of both Utah and Idaho, and in particular, the residents of Providence.

James Henry Brown is the man who built the Old Rock Church in this northern Utah town, a building that has stood for more than 135 years as an expression of faith, a symbol of community, and a work of art.

James was born in 1831 in Warwicksire, England, where he learned to work with stone at a young age. According to family records, he came in contact with the LDS Church at age 18. “He heard of a ‘Mormon’ meeting and went with some friends, hoping to see some fun. He became interested, however, and as he expressed it, ‘went to scoff, but remained to pray.'”

He was soon baptized. One day at church, “he became ill and fainted across the lap of Annie Bullock, who had joined the church with her family. They thus became acquainted and fell in love.”

James Henry and Annie were married in 1852. Shortly after, he was one of about 5,000 men from all over England who went to help with the building of the Crystal Palace, the great showpiece built by Queen Victoria and Prince Albert. He received a workman’s ticket to attend a concert there by Jennie Lind.

The Brown family later moved to London; then, in 1861, journeyed across the seas and across the plains to Utah. There, Brown obtained work as a mason on the Salt Lake Temple.

In 1864, he met William Budge, whom he had known in London. Budge was then a bishop in Providence, and he asked Brown to move north, which he did.

In 1869, when the townsfolk decided to build a church to replace their log meeting house, the contract for the rock work was given to Brown for $1,000. The building took three years to complete.

In addition, nearly all of the rock houses in Providence, Logan, and Smithfield built before 1878 were the work of Brown. He also built the old ZCMI (First National Bank) in Logan, did the original part of the Cache County Courthouse, and the O.S.L. Depot. “Brown’s Roll Off,” nine miles up Logan Canyon, where he used to roll logs down the mountain to the river, is named in his honor.

Early in 1879, Brown moved to Logan, where he started the Pioneer Monument Co. “Most of the early headstones in Cache Valley cemeteries were his work,” said Mark Brown. The family also bought a hotel in Logan, which Annie ran while her husband operated the monument company.

Later, they moved to Richmond and then to Montpelier, Idaho, where he started Bear Lake Marble Works. (Along the way, Brown also took a second wife and spent a term in the penitentiary because of it.)

Brown died in 1905 and was buried in the Providence Cemetery.
At his funeral it was said, simply, “he was a good man.” And his legacy lives on, not only in his works and his family, but also in the beautiful stonework that remains to this day.

“He was like a lot of the pioneers,” said Mark Brown. “He did remarkable things, but to him they were ordinary.”